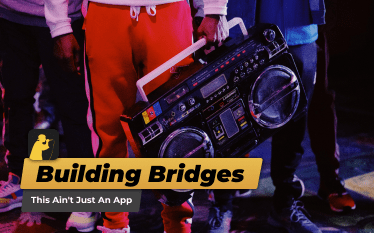 With collaboration being such an essential component of hip-hop, it only makes sense that our users love to hop on each other’s tracks. Whether it’s an emotional track with artists sharing their side of the same coin, or bar-for-bar bangers where things can get a little competitive, the sense of community and brotherhood experienced on a hip-hop track is like nothing else in music.

The diversity and sense of family here at Rap Fame is something we are extremely proud of, we owe it all to our great community of rappers who continue to uplift each other and give us amazing songs day in, day out.

To see that our app has allowed some users to go a step further, meeting and collaborating in person, has really blown us away.

Just a few months ago, 5 prolific Rap Fame artists who go by the names of Tollz, Sucka Free, Lady Cyfa, Penor Penny and L Chubbs on the App, planned to link up at an event in their home town of New York.

When the showcase (organised by Cyfa) was cancelled, she used the refund from the club to book some studio time and the five of them got to work. Fuelled by smoke clouds and pizza, they produced this juggernaut of a cypher, which went on to be featured on our app and receive a ton of love from the community.

“There wasn’t one dull moment that night we laughed all night into the morning.I have previously met Chubbz on several occasions so I was already familiar with him, but meeting everyone else was so amazing “

One of the most popular crews on our App, #Bar3xamz, is what allowed users @ivry and @superman14 to link up around Christmas time last year. With work responsibilities bringing Ivry to Supa’s hometown of Champaign Illinois, the two linked up for some Christmas shopping. Ivry even bought some gifts for Supa’s kids!

The two had never met previously, and we’re extremely proud and humbled that our platform was able to facilitate such a genuine friendship. Supa let us know that he joined Rap Fame at a time of extreme personal struggle and was able to find an outlet here that really worked for him.

“I joined the app last year after my sister was killed. Figured I’ll start rapping to express my feelings. Ended up battling Ivry and ever since then he been a brother to me”

Here at Rap Fame we have always made it our mission to bridge the gap between everyday people and the Hip-Hop world. People can effortlessly create tracks to express themselves and tell their stories, and spread them far and wide to like-minded people. We think that’s pretty special, and we can’t wait to keep witnessing friendships flourish and hearing the amazing music that comes from it. Our community truly is one of a kind.