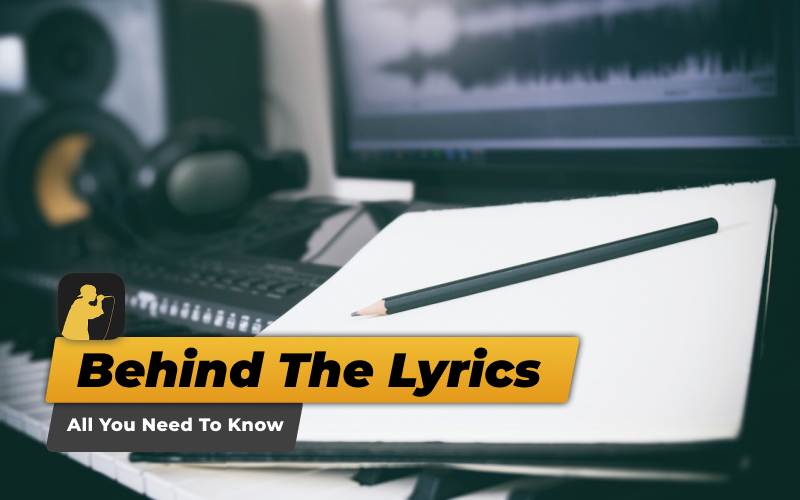 We take you through our popular Behind the Lyrics video series, travelling back in time to see how the series has evolved over the years!

We’re all about lyrics, listens, and love at Rap Fame!

Our Behind the Lyrics video series is the perfect combination of these three things.

In a nutshell, we spread the love by putting out videos where you can listen to your favourite artists break down their dope lyrics 📝!

This is a great way for beginners to get some insight into the way that rappers with more experience go about their craft.

Likewise it’s a treat for experienced rappers as they get to enter the world of a fellow wordsmith.

Nothing like broadening your horizons and gaining perspective to boost your own creativity 🧠.

Has it always been the same??

The way we’ve presented these videos has changed a lot over time.  And presentation means a lot – it shapes how you watch, listen, and learn.

So we thought we’d take you through the different faces and names of Behind the Lyrics over the ages.

Some of our oldest and most loyal community members ❤️ may spot some things they recognise – so keep your eyes peeled!

Everyone loves an origin story!

Behind the Lyrics started off around two years ago.

But back then it wasn’t called Behind the Lyrics, it was called BattleMe Stories.

Our original flagship app was BattleMe, before Rap Fame slowly took over.

What is fitting is that the first BattleMe Story was about International Women’s Day, which we just celebrated earlier this month!

The series went through some other name changes, including the very imaginative…… 🥁 ……

Behind the Scenes!! (I know, not that different 🤫.)

We made the videos then in a very basic way.  We used the video editing tool Filmora, which will always have a special place in our hearts.

Fillmora is a great tool, it’s easy and quick.

But as our community and output grew, we needed to grow too and started to use more powerful tools.  That’s why you may notice there is a very different look and feel between our first videos and our most recent videos.

But more on that later, back to the beginning for now…

Each video had its own theme.

One of the very first videos was all about whether peaceful or violent lyrics are better in rap.

Let us know in the comments if you happen to have an opinion on this, we’d love to hear your thoughts!

We then had a video focussed on tracks made by Rap Famers that were based on, or inspired by, films.

At first, we didn’t actually include any footage of the artists in the videos.  We just cut between various shots, clips, and lyric screens.

But then, something BIG happened!!

One of our hot rappers, Sirius Issues, volunteered to film himself talking about a track of his.

In that very moment, the Behind the Lyrics series as we now know it was born!

We were inspired to bring about the current format where we cut between clips of the track with lyrics on-screen and clips of the artist talking and explaining their work.

And, to be very honest, we think this format is great!!

The series took another real turn for the better with our video showing off the work of Uncle Sam.

This video worked amazingly because the track had such a powerful, solid narrative about a couple gradually and painfully drifting apart from one another… with a plot twist you’ll never predict!

To see Uncle Sam talking about his track, Leave Me (The Letter), was on another level because of the complexity of the track and its plot.

There were other things that made this video such a milestone.  We also had the idea of having a stock video in the background with the lyrics on top, which added some texture.

And we decided to have a different visual style for each show – different backgrounds and different cuts etc..

We also had a new video editor come on board around this time, who changed things up a bit.

This video editor asks the artists to send a video or videos of themselves talking about their track, which we then cut with various things.

The next big step forward was our show with Abi Nyxx.

This was an incredible video.

Not only is Abi an extraordinary talent and personality, but in her track Moves, she told the doubters and haters in clear terms where to go!  (Away, if that wasn’t clear…)

She definitely proved a certain someone wrong when she took pen to paper for this track.

Then we put out a heartbreaking, true story from Breeze.

Our hearts go out to Breeze – his tremendous strength in such a difficult time is an inspiration as well as a testament to the power of music and words.

Breeze is one of the hottest members of our community and recently knocked it out of the park with his record-winning 1 million listens on Rap Fame!

You can read about it in our first blog post.

There are so many more Behind the Lyrics videos that you really shouldn’t miss.

Sadly I can’t talk about them all here as I’d keep you too long.  But to give a few more special mentions, check out Brodeezy, Isaiah Carter, R2, NAYME, and our most recent vid by Dexidous 👊.

There’s something there for everyone – emotional lyrics, fun lyrics, deep, happy, you name it!

There’s so much talent out there in the Rap Fame community and so many hot artists that deserve to show off their work.

Keep doing what you’re doing and hopefully we’ll be going Behind the Lyrics of your latest masterpiece very soon!

Keep up with us here at Rap Fame’s new blog!  We do tutorials, feature some of our amazing users and their tracks, and cover news from the hip hop world.  Drop us a comment below!